So here’s what happened. Right at the start of the month I ended up with a massive pain in my left arm and were unable to even sleep from how much it hurt. I was going back and forth between hospitals to figure out what was going on and it was a total mess. Following that I had further hospital visits for another reason as well as a trip abroad happening in the middle of it all. So I never had the time to sit down and get this post up in decent time. But I’d not forgive myself for skipping a month, so here we go!

I have waited so long for my chance to write this.

I’ve been reading Akuma no Riddle since 2014 and followed the Japanese release of the series to the very end. Volume 5 marks the end of the series and I was very pleased with how it ended to say the least. The premise if the series is a battle royale game for assassins. Twelve assassins, one target and one bodyguard for the target. We follow the voluntary bodyguard, Azuma Tokaku, who defends the frail Ichinose Haru from the other girls trying to kill her, all while the two fall more in love.

Being a book by Kouga Yun there’s a lot of variety to the characters and even the appearance of gay men, albeit in very minor roles, despite being a Girls Love book. I can’t praise Minakata Sunao‘s artwork enough either, as it’s packed shock-full with personality that fits the series perfectly. People might have seen the 2014 anime adaptation of the book and either be interested or turned off from the book as a result, to the latter group let me say this.

When the anime was adapted, the manga was half-way through its story. The anime worked on a basic outline of the future manga chapters but didn’t have the actual chapters to base it on. As a result, the second half of the anime was not as tight as the first half and many felt the last few episodes were a massive letdown. I urge you to pick up the manga if you felt like the series could have been done better by the end. The manga is just that damn good. 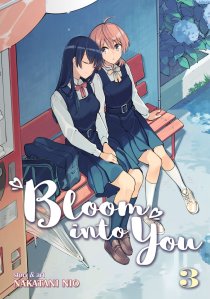 Bloom Into You (Volume 3) by Nakatani Nio

A rather interesting thing about Bloom Into You by Nakatani Nio is how much it focuses on not falling in love, it’s not so much a story of unreciprocated love as it is about someone struggling with the risks and responsibilities that comes with love. It’s a very different tone from other high school Girls Love stories, but in a good way.

Yuu is a girl who’ve always been enamored with shoujo manga romance stories, but when a boy finally asks her out she doesn’t feel like it’s right. She asks the student council president for advice on turning someone down, but is shocked to learn that the next person to confess to her is Nanami herself! I’ve not read volume 3 yet myself, but based on previous volumes I feel I can highly recommend the series. It gives an interesting angle on romance not seen in many other stories. It’s sweet, charming, sad and often just beautiful in its execution.

I used to be a fan of Citrus, but sadly I find that it lost what appeal it had quite early on. Still, six volumes in and Saburouta‘s incest love story is still one of the most popular Girls Love stories in the west. The series also has an upcoming anime adaptation, which I will say I’m slightly looking forward to depending on how much of the series it decides to adapt.

If you’ve not read Citrus before, it’s the story of Yuzu and Mei, two step-sisters who are just getting to know each other and after initially being incompatible in every possible way they find themselves sexually attracted to each other. Eventually they go from just odd moments of sexual tension and kisses to becoming a couple, with plenty of drama inbetween. It’s a very angsty manga, to say the least. Saburouta loves throwing in sudden negative developments for the two, which is the appeal of the series for many.

I love this series so much, in fact, I’ve already gotten the North American release of this book as of writing despite the European release not being out for another three weeks. That’s how much I love this series. Kase-san and Shortcake close out the initial magazine run of Kase-san and moves into the series run as a web comic in the next volume.

The music video based on the manga was popular enough to have had a second animation project greenlit as well, meaning we might be one step closer to a full anime adaptation (fingers crossed!) at this rate. If you’ve not started reading Kase-san yet you are doing yourself a massive disservice as it’s easily the best localized Girls Love book currently releasing.

Here’s a classic. Sweet Blue Flowers, or Aoi Hana, tells the story of Akira and Fumi, two former childhood friends who end up meeting once again. While Akira is excited to rekindle their friendship, she soon learns that Fumi is struggling with a broken heart as the person she was in love with, an older woman, has gotten married..

Dealing both with the subject of acceptance as well as the self-loathing that can occur from feeling “different” regarding your sexuality, Sweet Blue Flowers has long been a favourite among Girls Love readers and I’m glad it’s finally coming west in an official form. The series was adapted into an anime in 2009 which can be watched on Crunchyroll in certain regions. 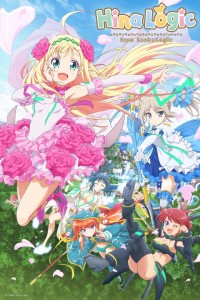 So, this is a bit late as the series has actually ended already. But I didn’t realize at the time of writing the current releases back in July just how great and gay this series would be. Hina Logic is a spinoff of the cardgame and anime Luck & Logic, an anime I personally found to be absolute trash. However, Hina Logic is a bit different from the main draw of the franchise. It’s a magical girl anime set in a world where there’s no evil left to be defeated.

It’s one of the funniest and most charming shows of the year and manages to have a ton of subtext and canon girl/girl representation along the way. I don’t want to spoil the series, so please, just sit down and watch it. If you like slice of life comedies and magical girls, this is the series for you. It’s an absolute delight.

BLUE REFLECTION is an RPG not too unlike the popular Persona series where you manage both a social life at school and a second life fighting monsters. The difference? It’s an all girls school and you’re magical girls. By building up your friendships and relationships with other girls at school they can power up your fight and become important allies as well.

And there we are. Better late than never, right? Right?

Hopefully I won’t have a bunch of health issues get in the way of October’s post. Thanks for joining me another month for some Girls Love!