Let’s just say that when I heard Gonzo was making an anime adaptation of the video game Akiba’s Trip, in which you defeat possessed human beings by stripping them naked on the streets of Akihabara, I wasn’t exactly jumping with joy. It’s no secret that Gonzo’s reputation in the anime community have been sinking steadily over the last couple of years, with their best series either being forgettable or unable to leave any bigger impression.

So colour me surprised when I went into Akiba’s Trip: The Animation‘s first episode and came out feeling rather entertained by the first full-length anime of 2017. There might actually be something here that’s worth sticking around for.

Following an outbreak of civilians getting turned into “bugged ones” in Akihabara, rumours have started circulating about the streets no longer being safe. True enough, the bugged ones are real and are endangering innocent lives more and more. Fighting against the bugged ones we have Mayonaka Matome, a brawler with super-human abilities who single-handedly take on the task at hand. After meeting Denkigai Tomotsu, a young boy who managed to get himself killed by the bugged ones, she makes the decision to give him the same magical abilities she have to save his life.

That’s the general story of Akiba’s Trip if we take it as seriously as possible, which one really shouldn’t do in the first place. The series makes its ridiculous premise and tone clear from the outset, with the first episode never stopping to take itself seriously regardless of the situation. Tomotsu and Matome are our respective male and female leads, and while their roles are firmly placed within the anime stereotypes of the awkward otaku and the mysterious tsundere, they play off each other quite well in their interactions so far.

There are two more characters in the main cast starting with Tomotsu’s little sister, Niwaka, who comes to Akihabara with her brother in order to spend the day together. Niwaka was probably my favourite character in the first episode, playing the “straight man” to a lot of Tomotsu’s behaviour. She’s quick-witted, charming and has a great panda-themed fashion sense, what’s not to love? Finally there’s Ahokainen Arisa, a cosplayer and otaku who Tomotsu runs into by chance searching for a rare action figure.

As mentioned before, the bugged ones are defeated by stripping them of their clothes. Matome explains that once the bugged ones’ skin are exposed to enough air they return to normal. In the original game, this enemy was almost exclusively female characters, wearing its intended audience on its sleeve. When the second game made its way to the west, they added more male characters to the general enemy roster, to make it less focused on stripping women. What I found surprising was that the anime has followed the example of the western localization in this regard. 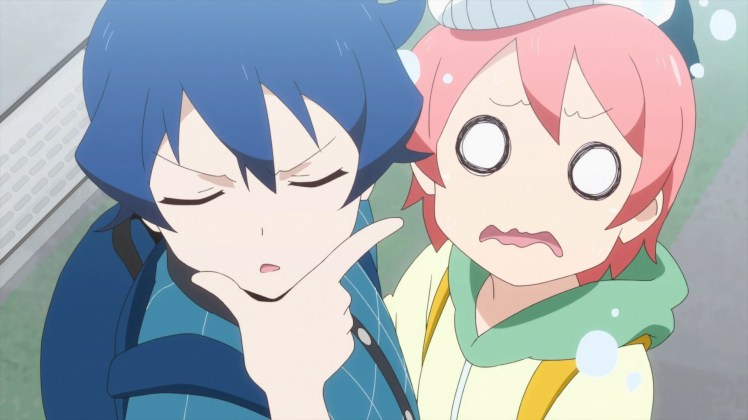 While the focus still clearly lies on getting girls naked for a quick gag, there are several male bugged ones throughout the first episode that are treated the same as the female ones. While one might still have issues with the premise despite this, it did make it sit a little better with me overall. Especially considering that the series is clearly self-aware when it comes to a lot of these things, focusing on comedy above titillation at all costs. While some jokes do fall flat, there were a surprising amount that managed to stick the landing. The timing of delivery on a lot of the jokes were particularly strong, making for some seriously entertaining scenes. It’s not laught-out-loud hilarious, but it’s hard not to smile as you’re watching.

But I think my favourite aspect of Akiba’s Trip was the animation. The art style and its presentation is very appealing, with an animation style I could best describe as “bubbly”. From simple visual quirks to characters to the rather intense combat scenes the animation never forgets that you’re watching a silly cartoon comedy, using every trick in the book to appear as unrealistic and stylized as possible without falling outside of its art style. It’s seriously charming and made for a very visually impressive first episode.

However, despite all the praise I actually have for the first episode of Akiba’s Trip, the final result is far from perfect. By the end of the first episode, the gag behind stripping the bugged ones are already starting to wear thin and that’s not a good thing for our general villains. What the series will hopefully do is make up for this with more fun character interactions, but only time will tell in the end. As of now, the anime certainly did surprise me by being far more enjoyable than the premise suggested, but it still has a way to go to leave a lasting impression.

I should mention that the series already has an English dub out, with Funimation releasing the dub on their own streaming service at the same time as the version with Japanese audio and English subtitles on Crunchyroll. I watched the episode with the Japanese audio and can’t comment on the dub’s delivery, though I might check it out at a later date if I were to stick with the series for a longer time.

I’ll be keeping an eye on Akiba’s Trip: The Animation for the coming few weeks and I hope it improves further. It’d be nice to have a clear and strong example of Gonzo having made something both fun and memorable again, but for now I can’t give it more than an “okay” rating. Here’s to future episodes being even more entertaining and hopefully lifting that rating higher up.

Akiba’s Trip: The Animation is licensed by Funimation and is currently being streamed on Crunchyroll.
Click here for more Winter Season 2017 impressions!